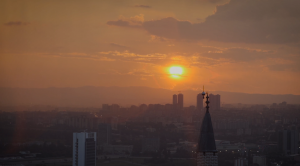 A lot of our customers ask for moving camera shots because they think that they make their videos look more cinematic. You know what? They´re right! The question is WHY do moving camera movements make videos so much more engaging and dramatic. The short answer? Intent.
Let´s talk about intent. If you are filming little Billy´s birthday party with a small consumer camera or mobile phone, you are prob not filming with the intent of psychologically influencing the perception of the people who will later watch the video. You´re not trying to manipulate the viewers. You´re witnessing, not filmmaking.
Filmmaking, on the other hand, has a toolbox of camera movements that affect perception. These shots are achieved using sliders, handheld gimbals, steadycams, jibs, dollies, fluid head tripods, and other systems. Filmmakers intend for you to comprehend, feel, or interpret something from the various camera movements they employ.
For example, in the video below, you can see examples of these movements used in famous films. How do perceive each movement? Does it reveal important information to you? Does it make you feel a certain way?

A filmmaker will choose the shot based on what they want you to perceive. Are these people relaxed or anxious? Lightly celebrating or deep thought? Is something wrong in the world, or is everything just fine? The use of movement in the scene can play on you emotionally, as well as reveal (or not reveal) key information.
Above all, the camera movement must make sense. It has to have a purpose. You don´t want a camera floating around just because “it looks cool.” You have to know and understand how the shot is actually supporting your story.
MOTIVATED VS UNMOTIVATED SHOTS
Basically, camera movements come down to two types: motivated and unmotivated. Motivated movements respond to action: we´re filming a speaker on stage –  as the speaker walks back and forth across the stage, the camera follows the action. Wherever the speaker goes, the camera goes. We naturally expect this to happen as it mimics real life; e.g., the speaker walks across the stage and we turn our heads to follow. On the other hand, unmotivated camera movements ignore the action and put the power in the hands of the filmmaker or storyteller. For example, the speaker stands still but the camera does not, i.e., at the beginning of the shot the speaker is on the left of the screen, and by the end of the shot, the speaker is on the left of the screen.

Unmotivated movements can be logical or illogical. Logical unmotivated shots reveal new information, such as a sign that shows the name of the event that the speaker is speaking at. Illogical unmotivated movements bring attention to the camera movement itself, they engage the viewer with the “supernaturalness” of floating through the air and bring attention to the fact that the viewer is under the filmmaker´s control. Quiz time! What kind of movement are we doing if we are filming an interview in which the interviewee is sitting or standing still? Two answers.

As it may be difficult to visualize unmotivated illogical movements, here´s a sample video. As Paul Schrade points out in his article: Game Changers: Camera Movement:
“When a camera move is imposed on the action rather than just following or accenting it, something very interesting happens. The Conformist (70) is a film full of unmotivated and beautiful camera movements. When the Fascist handler who supervises the Jean-Louis Trintignant character paces back and forth in a park, the camera moves with him. But after he sits down on a bench, the camera slides over to a tree blocking our view of him. In the next shot, as Trintignant heads down a corridor, the camera retreats in the other direction. Two remarkable examples of illogical unmotivated camera.”

Interested in learning more about using camera movements in your next video project? Contact us now for a free consultancy.