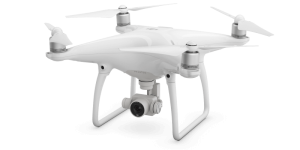 Originally used by the military for a variety of tasks including  surveillance, reconnaissance, and airstrikes, drones are now being used in many commercial civilian applications such as shipping & delivery, crop monitoring, storm tracking, geographical mapping, and of course videography.

In the video production industry, the cost efficiency of using drones instead of helicopters guaranteed a speedy acceptance. Helicopters cost thousand of dollars per hour while drones cost the same or less for an entire day of shooting video.
Drones are very efficient when shots need to be repeated, which is often the case.
Reshooting with a helicopter shot is time-consuming  – and time is money. Drones can much more quickly reset to reshoot a scene.
In addition to cost savings, drones are more versatile than helicopters. Filmmakers often employ drones to fly where helicopters cannot go: between trees, very close to structures, and inside of buildings. While helicopters can  go places that drones cannot go, unless you need to transport your film crew or shoot in remote locations, drones are without a doubt the best choice.

Here’s 5 of our favorite shots that you can do with drones.
REVEAL SHOT
The reveal shot beings with a close shot of the subject ash the drone moves  upward and backward, revealing the surrounding environment.

AERIAL PAN
In an aerial pan the camera rotates horizontally side to side, following a subject or showing the distance between objects.

TRACKING SHOT
Tracking shots follow a subject from the front, back, or side.

THE FLY-BY
Head your drone straight at an object and fly past it.

GENTLERISE
Start at the ground shooting directing down and slowly rise up.


Would you like to know about other kinds of drone shots or use a drone on your next video? Contact us for a free consultancy.