Post-Production: why does it take so long? | Stark Crew
Skip to content
NEED A VIDEO CREW?
GET A PRICE QUOTETODAY 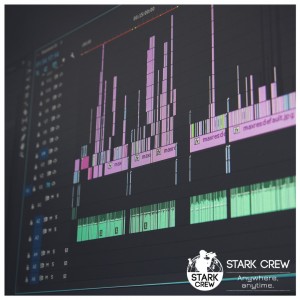 Jean-Jacques Rousseau said that “Patience is bitter, but its fruit is sweet.” At Stark Crew, we can´t think of a sweeter payoff than a great video. But to make that great video, a tremendous amount of patience is needed during the post-production process. In this article, we will explain why.
Post-production is everything that happens after you have shot the footage. This includes but not limited to the following:
File Transfer & Organization: Footage is not sent directly from the camera to an editor´s computer. Usually, the footage is recorded onto a memory card which is then transferred to an external hard drive. This footage needs to be well-organized on the hard drive. Many people know what it is like to have a computer overrun with random folders and files on their computers – it can get out of control fast. A video editor, in contrast, must be extremely organized. With hours or days of footage, and possibly multiple cameras, the number of footage files on the hard drive can be daunting. For example, here is how one editor keeps his footage organized:

For people to watch this video outside of a video editing software program, it will need to be exported into a single video file, such as an .mp4 or other video files you may already be familiar with. And in order for you to view any of the effects added to the video when it was edited, the effects must first be rendered or implemented into the video itself. Again, this is just like when you put an effect on your Instagram photos. But in the world of high-resolution video and custom effects, rendering and export take much longer.
Average time on Stark Crew videos up to 1 day.

SOLUTION: In order to solve these problems with the goal of increasing speed, at Stark Crew we ask that all client feedback is given in an online video draft review software. We currently use www.lookat.io. Inside of this platform, all project stakeholders can consolidate all of their comments onto video drafts in one single place and discuss instructions so there are no contradictions.
The more detailed and comprehensive instructions that are given, the faster the final video will be delivered. Keep in mind that every single modification of the video takes us back to step #4 and we have seen weeks – even months – added to a project’s timeline because certain key customer stakeholders were travelling or on vacation when their feedback was needed, comments coming in very late in the game, or wasted versions created when trying to implement confusing or contradictory instructions.
Average time on Stark Crew videos: up to 2 weeks.
6) Distribution & Sharing. Once the final video is made, various exports may be needed to generate different types of video files optimized for online and/or offline viewing. Exporting also takes time and we want to make sure we are exporting for the correct distribution channels, whether it’s a giant TV screen at an event venue, or for distribution on Youtube.
Average time on Stark Crew videos: up to 1 day.
HOW TO MAKE POST-PRODUCTION RUN SMOOTHLY & EFFICIENTLY
You can avoid a lot of stress by following the following 3 tips: