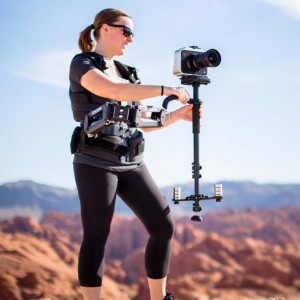 As part of our series on camera movements, we’re looking at the different ways that cameras can float or fly through space.  We´ve seen sliders and handheld gimbal stabilizers – now let’s get into steadycams.
For handheld “flying,” movements, the big debate out there in the world of video production seems to be which is better:  a 3-axis gimbal system or a steadycam. We’ll get to that in a minute…
But first, let’s clear up a bit of confusion with the name. “Steadycam” with a Y refers to this type of camera support in generic and general way. On the other hand, “Steadicam” with an “I” is a brand name created by the inventor of this system.
While all Steadicams (brand) are steadycams (generic term), not all steadycams (generic term) are Steadicams (brand). For example, another popular brand of steadycams is the Glidecam brand. Similarly, many people refer to all brands of tissues as “kleenex,” which of course is not the same as the specific brand  “Kleenex” which introduced facial tissue in 1924.
This unmotorized camera movement stabilizer system was invented in 1975 by American inventor Garrett Brown and released under the brand name “Steadicam” by Cinema Products Corporation. One of the first tests of this system was Rocky Balboa’s famous stairway ascent scene in Rocky.

While gimbals support systems use motors, steadycams are unmotorized – they use a simple system of weights to stabilize shots. So in a basic sense, steadycams are much less complicated. There are advantages and disadvantages of each system, as well as personal preferences held by different videographers.
Here at Stark Crew, we will use either a steadycam or a 3-axis gimbal depending on various factors with special consideration to the videographer´s experience and preference, as well as the shooting situation. As you’ll see in the videos below, there are pros and cons of each system in different shooting environments.

Interested in using a steadycam system on your next video production? Contact us now for a free consultancy.