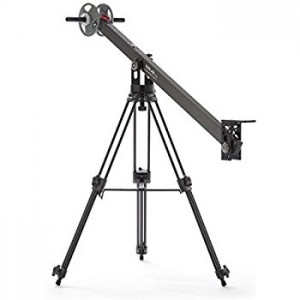 Thus far in our series on using camera movements, we´ve discussed sliders, handheld gimbals, and steadycams. Now let´s look at another camera movement system:  a jib or crane.
The function of this camera movement stabilizer system is to give vertical movement to a shot. If you have ever seen a movie where the camera floats down from a treetop and perfectly stops on the main character standing on the grass below – that was done with a jib or crane.
You´ll notice I keep saying “jib or crane” although this article is called just “Using a Jib.” Allow me to explain: outside of the world of filmmaking, a jib is part of a crane. Specifically, it refers to the projecting arm of a crane. However, within the world of filmmaking, the terms are often used interchangeably.
That said, many filmmakers use the term “jib” to refer to the smaller cranes used on modest video productions, while reserving the word “crane” to refer to the larger, industrial sized cranes with built-in seating and controls that are often used on major movies.  This is in line with our thinking here at Stark Crew – so to end the debate, we use small cranes and call them “jibs”
Now that the vocab lesson is out of the way, the question is – why would you want to use a jib?
Any camera movement system that is tripod-based or locked down in some way is going to give you steadier shots, as well as the ability to repeat camera movements exactly. Also, the extra sturdiness often allows you to use longer lenses which can be hard to control on handheld camera stabilizers. Furthermore, jibs can rise far higher into the air than the normal videographer can reach with his or her own hands. Therefore, if you are looking for a dramatic effect such as dropping down from a treetop, store signage, or a window, to a main character standing below, the jib is ideal. Or oppositely, a jib can start below;  e.g., filming a dollar bill on the ground as it is picked up by a lucky passerby and held up high in the air in celebration.
Here´s a few videos that illustrate all of these concepts very well: