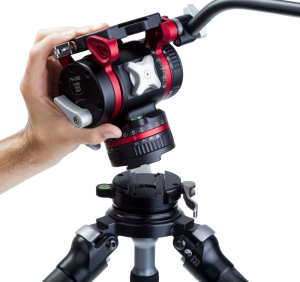 Let´s cover camera movement 101: tilts and pans. Tilts refer to moving the camera on a vertical axis – just like when you look up and down. Pans refer to panoramic movements on a horizontal axis – just like when you look side to side.
As these camera movements mimic the human head (which explains why the rotating device is called the tripod “head”), they are often employed to give the viewer a more natural experience.
In contrast, sliders, dollies, and jibs, create camera movements that seem like you are flying or floating – a more supernatural experience.
Tilts & pans are used to follow a moving subject or to reveal new information. You can see this demonstrated in the video below.

FLUID HEADS
The key to a smooth, seamless movement is the use of a fluid head tripod instead of a normal photography tripod. While most still photography tripod heads can move, they are often jittery. This is because they used “friction heads” or “pan heads” that move on a system of plastic washers. Fluid heads, however, use a sealed liquid to create a miniature hydraulic dampening system. The result is much smoother as you can see in the video below.

There is a great variety of fluid head tripods, ranging anywhere in price from $75 all the way up to over $13,000 (so yes, choice of tripod can certainly affect your video’s price tag!).
MOTORIZED SYSTEMS
Another way to make smooth pans and tilts is by using a motorized support system, which you can see in action in the video below.

PANS & TILTS IN TIME-LAPSE SHOTS
One of the most beautiful uses of a motorized system for pans and tilts is when they are used to record moving time lapses. In a time-lapse sequence, the video camera records for long periods of time – often over many hours. Later on during editing, the recording is sped up to squeeze many hours into just a few minutes or even seconds. You can see this demonstrated in the video below.

Would you like to learn more about adding camera movements to your video? Contact us now for a free consultancy.