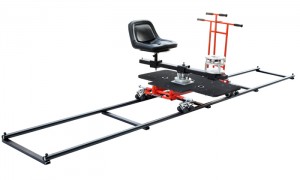 Anyone who has been on the set of a major film production or seen a “behind-the-scenes” or “making-of video” of a Hollywood movie has seen a dolly. Dollies are rolling camera supports that generally move along rails on a set of tracks.
Similar to a camera slider, a dolly can create smooth shots as it is pushed along a set of rails. However, dolly rails can be much longer than sliders and offer more stability for big cameras. Some dollies do not roll on tracks, but roll like a cart with wheels on the ground. But as a rule, if you want to get smooth horizontal movements that are easily repeatable take after take, a rail system is the way to go.

Dollies can move while the camera itself pivots around, just like an army tank moving in in a straight line with its canon moving around looking for targets.

Stark Crew does not work on big studio productions, so we do not use a dolly very often. We work on micro-documentary videos and for our purposes, a camera slider tends to suffice when we need a stabilizer for smooth, horizontal movements.

Check out a dolly shot in the video below.