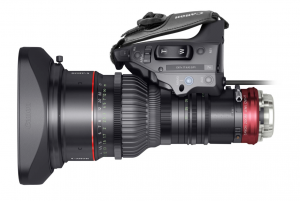 You know zooms. Consumer cameras all have zoom controls and when shooting with a mobile phone, you can zoom in or out by simply sliding your fingers across the screen. The zoom effect is achieved either by changing focal length or digitally simulating that change.
But while you certainly understand what a zoom is, do you understand how it is used in the emotional context of video storytelling?
The best way to understand a zoom camera movement is to compare it to a shot done with a camera slider or dolly.
When using a zoom, the focal point stays the same. Imagine a red apple sitting on a kitchen table. As you zoom into the apple, the apple gets bigger while the kitchen background falls off-screen. The emotional effect here is giving decreasing importance to the background and giving growing intensity and importance to the apple. As the background shrinks and the apple grows, there is a rising sense of anxiety or claustrophobia. Also, consider that magnification is not a natural human power – you can’t zoom in with your own eyes. Thus,  a zoom movement brings attention to the camera movement itself. It’s almost like the film’s director intensely yelling “Look here!”
In the same case of the apple on a table, if we instead move closer to the apple with a dolly, the background does not shrink so drastically. A dolly essentially mimics the viewer walking toward the object, which is much less intense and claustrophobic, feeling much more natural.
Here are a few shots that demonstrate the intensity of a zoom shoot:

Did you notice that a few of those zooms shots especially messed with your brain? That because some of those shots were “dolly zooms” or “push-pulls.” I’ll explain these shots again using an apple on a table: imagine that the dolly is rolling toward the apple while the camera is zooming out. The apple will more or less stay the same size while the background becomes immensely bigger. If we rolly the dolly away and zoom in, the apple will stay the same size while almost all of the background will magnify and fall off of the screen.
The dolly zoom effect makes it feel like the background itself is painted on a moving wall that is either being pushed toward the camera or pulled away from it. These types of shots are often used to show a dramatic change, threat, or realization.
In the various shots below from well-known films can you tell which shots are zooming in or out while the dolly moves forward or back?

The Dolly Zoom is a unique shot reserved for very specific moments, and almost entirely limited to fictional cinematic productions. For now, let’s get back to more traditional usages of the zoom, one that may be able to help you with your own videos.
Quite often, customers want to make videos that include photos of a past event or project when there is no video footage available to use. In order to turn these photos into “motion pictures,” we can zoom in or out of these photographs. The sort of zoom movements used on photos are a part of what is known as the Ken Burns Effect, referring to documentary filmmaker Ken Burns.

It’s also important to mention that one of the most common places you will see zoom shots are in documentary films and on the news. This is because many of these videos are shot on the fly and in the field with real people who move around as they like, and not actors who follow movement directions. We are all very used to seeing zoom shots used in this way, which is why some Hollywood films have started to use handheld zoom shots when the director wants to mimic a documentary or news team in action.
Interested in learning more about using camera movements to improve your video? Contact us now for a free consultancy.